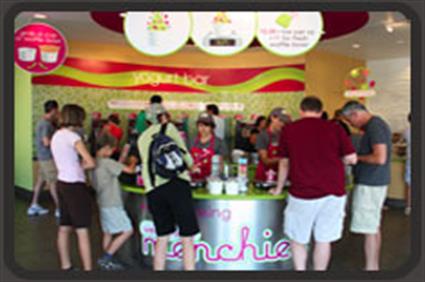 Menchie's experienced a banner 2010 as heightened cravings for frozen desserts helped catapult the brand to its status as the nation's fastest growing frozen yogurt franchise.

After only three years of as a food franchise, Menchie's has opened more than 60 frozen yogurt stores, 40 which opened this past year alone. In addition, Menchie's has signed agreements for another 100 stores which are currently in development.

Outside of its expansion across the United States, Menchie's also opened two franchise stores in Canada and has contracts for locations in Mexico, Japan, Australia and Morocco, opening this coming year.

"Our 'check mate' is providing a cup of yogurt filled with smiles as our customers see Menchie's as a lifestyle brand in addition to being their favorite frozen yogurt destination," said Amit Kleinberger, CEO of Menchie's Global Headquarters.

"Our model – providing a superb product and the ultimate in-store experience – is an attractive one that promotes smiles, and sets us up for infinite future development. Based on current growth rates, we expect to open our 100th store within the next six months, and sign agreements for an additional 200 locations next year."

The unique Menchie's experience allows customers to help themselves to an unlimited mix of yogurt and toppings, including more than 100 rotating yogurt flavors and more than 70 rotating toppings. In 2010, Menchie's expanded its wide variety of offerings to include its own private label flavors, including 'Red Velvet,' 'Vanilla Snow,' and most recently, 'Gingerbread'.

Commitment to quality is another factor contributing to Menchie's robust success. Using the highest quality frozen yogurt at all of its locations globally which is made exclusively through its own label, Menchie's frozen yogurt contains live and active cultures and has received the Live and Active Culture (LAC) seal indicating its endorsement by the National Yogurt Association.

Fundraising has also helped put Menchie's on the map, both locally and nationally. In 2010, Menchie's franchisees donated tens of thousands of dollars to various charities and school programs, including Autism Speaks, The American Red Cross and the Muscular Dystrophy Association, among others.

"Because of our superior product, unique in-store experience, commitment to quality, and world renowned team, Menchie's has proven to be the preferred frozen yogurt franchise in the restaurant category," added Kleinberger.

In July of this year, Menchie's was named #1 in Restaurant Business Magazine's 'Future 50' list, ranking it the fastest growing franchise in the restaurant industry with a 748 percent growth. Additional awards that Menchie's has won include:

Menchie's mission statement is "we make you smile". Menchie's achieves this by providing customers with the opportunity to create their own unique combinations from over 100 rotating yogurt flavors and 70 rotating toppings, until their perfect mix is made.

Menchie's franchisees are actively involved in the community, donating thousands of dollars to local school programs and charitable organizations. In July 2010, Menchie's was awarded 1st place in Restaurant Business Magazine's annual 'Future 50' list, ranking it the fastest-growing franchise in the restaurant industry.